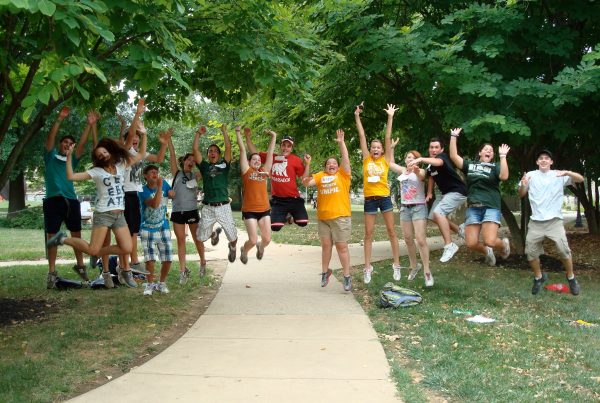 Although I was keenly aware of the extraordinary popularity-and-success of the George N. Parks Drum Major Academy, my first introduction to the DMA was an observation at a summer camp where Mr. Parks was working with 600+ drum majors.

He asked me to say a few words to the enthusiastic young leaders; it was a privilege to oblige his request.

I started by asking:

Who are the people representing the remaining 40%?

After talking with the attending directors I discovered many of the students were section leaders; they had no intention of ever being a drum major.

Then WHY were they enrolled in the nation’s most acclaimed drum major training course?

When I further explored the question, the answers from the band directors were all the same:

“I want my students to experience the leadership skills George Parks and his staff integrate into every aspect of the DMA curriculum.

My students can adapt all the taught blueprint content to fit their given section.

They leave this camp being better leaders and, for certain, being better role models for their fellow band members.”

Whether it’s marching, teaching, conducting, coaching, etc., all of these are applicable to the responsibilities connected with being a section leader.

Change the noun from drum major to trumpet section leader and the material is equally tailored for leadership success.

During the afternoon water break I asked Mr. Parks this question—

Is this a drum major camp or is it a leadership camp?

Know what he said?

Yes! How can they become a competent-successful drum major if they don’t understand the critical importance of their positive leadership skills and how to model excellence?

Then it all became crystal clear:

Schools were registering their drum majors and all of their sections leaders in the DMA program. The collective power created in an aligned leadership philosophy is beyond measure.

Drum majors returned to their homes with multiple allies who equally understood what was wanted-and-needed to achieve a superior band/organization.

I well remember visiting with one young lad about his role in band. He informed me he was a keyboard player and section leader of the percussion pit ensemble.

“Why are you here? Why are you learning all these marching skills? Isn’t that a waste of your time?”

He smiled and explained,

“Everything we are learning about marching can be tailored to coordinate our sticking, our body movements, our postures, our physical phrasing.

It’s about THE WAY we do WHAT we do.”

He evidenced a mature perspective needed to garner maximum benefits from his investment.

Having the band’s leadership team all on the same page is priceless. It gives the group a head start and a huge advantage when launching into the annual band camp.

It’s worth your consideration:

When the tide goes up, all boats rise!