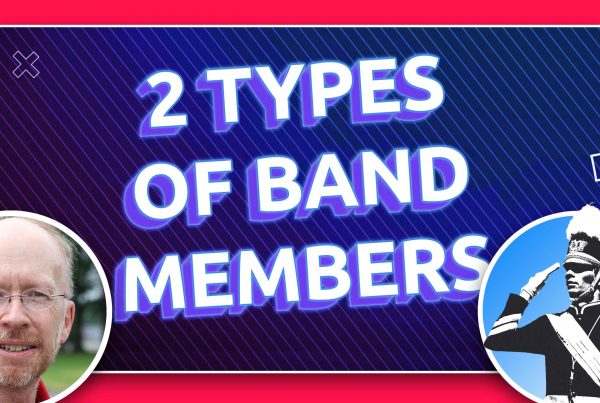 Rob Hammerton shows us how there are two kinds of band members: the Bandos-From-Birth… and the people like Benjy.

Benjy is a character in a story told by DMA’s great friend Dr. Tim Lautzenheiser.

Benjy was the terrified freshman who was ready to quit band at band camp, until his drum major intercepted him, adopted him, kept him in the band, and…. I won’t spoil the ending.

Here’s what Rob has to say about band members.

Every year, there are versions of Benjy in every band’s pack of new members. You yourself may have been one.

If so, then you as a drum major, section leader, or color guard captain now get the chance to pay it forward, and keep your Benjy in the game.

On the other hand, it might well be that a lot of the people we DO attract as new band members are the ones who were going to do band anyway.

A lot of your upperclassmen, your veterans, might be among those people. They’re going to march and play until the instant they graduate.

They’re the kind of people who would do band even if every halftime show was performed in the middle of a category 2 hurricane. They would do band if Genghis Khan were the director.

No matter what, THEY are going to be bandos.

Very often, band is an activity that gets people through school. For a few people, it literally keeps them from bailing out entirely.

For others, it’s a little more metaphorical. Some days I was thrilled to go to the band room and shut everything else out, when it was time.

So, keeping folks connected to the activity can be anywhere from helpful to CRUCIAL.

Every year, we face a challenge—this year especially. But it never changes:

Whether band is remote, hybrid, or all-hands-on-deck in-person, how do we communicate to new and veteran band members alike that band is the great thing we know it to be?

That’s what my writing teachers always said to me. So how do we show this?

I’m a church choir director. Can you think of an activity that’s more gutted by COVID?

Obviously, we choir people can’t conduct business as usual. But we keep meeting—virtually.

Current video-conferencing tech doesn’t allow us to sing together, live. But our choir and choir instrumentalists keep on meeting on Zoom.

We laugh a lot. We talk about the music we would be doing if we could. We keep tabs on each other.

We say things like, “when this is over…”, and talk about the great things we’re going to sing and play.

In addition, I’ve been making weekly “choir director check-in” Facebook videos for our musicians and the rest of our congregation.

To close each one, my tagline is “keep in touch, keep the faith, stay connected.”

3 things we have to maintain

However you accomplish them with your band, those 3 things are be crucial, this year or any year.

They have nothing to do with conducting or calling commands; they have very little to do with playing notes and catching cleanly and hitting drill sets; but they’re what we’ve gotta do:

We have to maintain 3 things:

How you DO all that, whether it’s online or in-person… that’s your call.

Starred Thought: “do what works” — and you know best what will work for YOUR band.

Doing these things can make it possible for your band to stay strong and/or to come back strong when it’s finally possible.

Keeping up the enthusiasm, too — so people don’t forget they love to be bandos.

And keeping up the sense of community — so people don’t forget that they’re each other’s bandos.

Band is a community.

You know that very well! And I know some of you are able to think of your bands as your second family. That community, that family, can have a lifelong IMPACT on the people in it.

We’ve gotta maintain it — for the sake of the Benjys and the Bandos-from-Birth.

DMA Inspires Teachers, Too. Here’s Why We Do It.