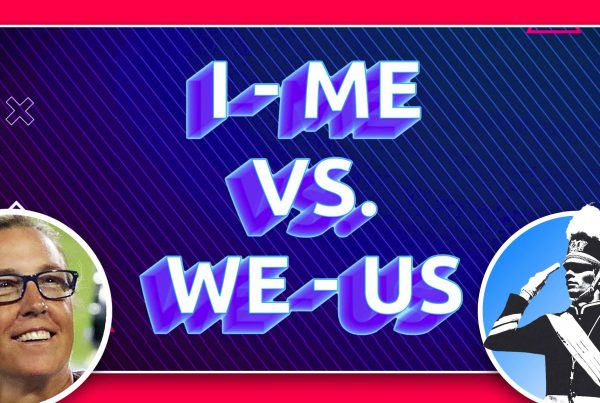 Heidi Sarver wants to talk about one of the most stressful experiences most DMA fans have gone through before:

Heidi is one of our Lead Clinicians for the George N. Parks Drum Major Academy.

In her “spare time,” she’s a Professor of Music and Director of Athletic Bands at the University of Delaware.

Here’s what Heidi has to say.

Think about the insanity of the stress— oh my goodness, the preparation!

You you spent time watching people that had the position that you wanted—whether it was drum major, color guard captain, snare captain, section leader—anything that your school has that carries a title.

You watched what they did. You thought about ways that maybe you could do it a little bit differently. You probably asked your band director for some information on on how to prepare—how to be a better Drum Major.

Maybe you even emailed a Drum Major Academy staff member. And hopefully you got some really great ideas from all those resources—maybe even some Starred Thoughts—and then you prepared.

And then you did it! You you followed your dream.

Lo and behold, here you are on cloud nine right now because you got the job you wanted.

Whatever it happens to be, you are happy as anything—and you should be. You worked hard for it.

And you’re living in a time period right now that I call I-Me.

Because that’s what band is about.

It’s ok for you to be in this I-Me state of mind right now. You put in the work and you got the title! You should celebrate! But at the end of the day, the next thing that has to happen is you need to flip that.

You need to get together with the rest of the leadership team, maybe you already have. If you haven’t you absolutely need to do that.

You need to start thinking about what life is going to be like this season, and it’s really hard, especially because you just got the announcement that you got the title–you’re going to be drum major!

Right now life’s a little bit difficult. There’s a whole lot of I-Me me in the world right now and, I mean you can see it all around you. You can see it in yourself if you take a look in the mirror.

Every one of those sentences begins with the word “I.”

It’s all self-centered and self-focused and it’s just so selfish and while I look at you and say “celebrate the fact that you are now drum major or guard captain” whatever it happens to be–switch it as quick as you can to “what can I do to make us better, what can we do to make us better.”

We need to get past being selfish. And that’s band! If ever there was an organization in the world that was the most unselfish organization it’s band because, unless everybody plays together and marches together and is there all the time, we’re not going to be successful.

So, as a leadership team you need to get together with your peers and you need to start coming with ideas on how to get your band together, and that starts now. It’s not going to start a band camp, it has to start now and, my heavens, we have the resources for it to start.

We’ve learned so much in these last three months of how to do things virtually. Is it the same? No—in fact in many cases it’s pretty awful. But, if we use it to our advantage, we can actually be ahead of the ball game for this band season.

I don’t know about you guys but I don’t know if I’m gonna even have a band camp right now. I don’t know what my marching band is gonna look like in the fall and that’s because we’re in a holding pattern until the university makes some decisions.

And you’re in the same place—your band director is doing like I am—preparing for a regular season honestly not knowing what the fall is going to bring.

But you, you have to be part of that preparation, so get together on Zoom or Google Hangout and come up with every kind of idea that you can think of to bring your band together. Throw it all up against the wall see what sticks.

It’s one of many, many projects. We all have, already, a manual of all of our stationary positions—photographs that are annotated of how to stand at attention, the ready,  parade rest, horns up for every instrument as well as without instruments.

What we’re doing for the first time is, we’re making all of those PDFs available to our new members, so the minute they get accepted to the program they’re going to be able to log on to the members-only side of our website, download that stuff, and start preparing during the summer.

So we came up with this great idea, that every member of the leadership team is going to videotape themselves moving from the ready position to the attention position (and they’re going to do it a couple of times) and they have a whole procedure sheet on how to do it so that every section is doing the exact same thing, the exact same way.

They will be sending those files to me, and I will edit those and underneath it I will put a voice-over of the commands so they can actually see somebody holding a clarinet going from the ready position to the attention position following our band command.

And all those videos will be uploaded for all of the incoming members to look at.

And it sounds like a lot, but it’s really not and it really doesn’t take much time at all because in the end, all of the incoming first year members to the Fighting Blue Hen Marching Band are gonna know how to stand at all those positions, how to move between all those positions, and all I need to do at rookie camp is review it. I don’t need to teach it from scratch.

The advantage of how your new members are going to feel with that already under their belt, as opposed to not, is absolutely huge.

So enjoy the I/Me portion of your life right now.

Celebrate it! Practice your salute in the mirror, go ahead. Make mom take photographs of you, especially when you get the uniform.

But tomorrow, start working on We/Us because it is the only way band will thrive. Take care everybody,  and I really hope to see you at Drum Major Academy in 2021.

It’s going to be wild.

DMA Inspires Teachers, Too. Here’s Why We Do It.