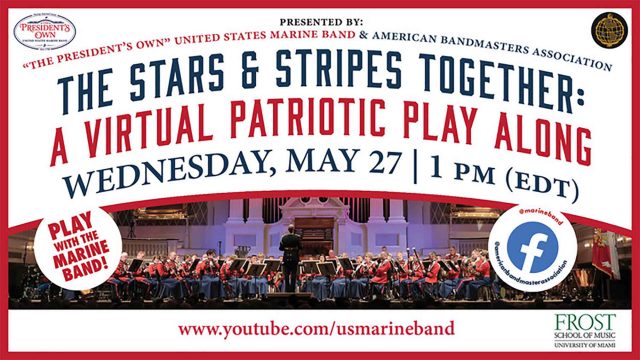 The American Bandmasters Association and the United States Marine Band invite you to perform virtually with the Marine Band!

On Wednesday, May 27, 2020, at 1 p.m. (EDT) participate in a special Sousa event with Colonel Jason K. Fettig of “The President’s Own” United States Marine Band.

With everyone joining online, Col. Fettig will conduct a performance of John Philip Sousa’s marches “The Thunderer” and “The Stars and Stripes Forever.”

This free event is open to anyone and will take place on youtube.com/usmarineband.

After the online play along, students through 12th grade are invited to submit a video of themselves performing “The Stars and Stripes Forever” for a worldwide collage performance that will be assembled and debuted on July 4th!

How to join the Play-Along Concert

Submitting a Video for the Stars and Stripes Project

Tips for your recording: